Valencia is the third biggest city in Spain, which has a lots of historic places, cultural and modern atractions for their visiters and is one of the most touristic cities of the Iberian mainland.

Founded by the Romans in 137 BC, the old district of Carmen de Valencia dates back to ancient times, while the cathedral is Gothic with Baroque with Romanesque complements and the modernist Central Market remains to one of the liveliest in Europe and very popular with tourists.

Although the outside of Valencia are modern and industrialized, the historical center is very beautiful and typically Spanish, almost untouched by tourism. The cruises from Valencia expose this beautiful region of the world. 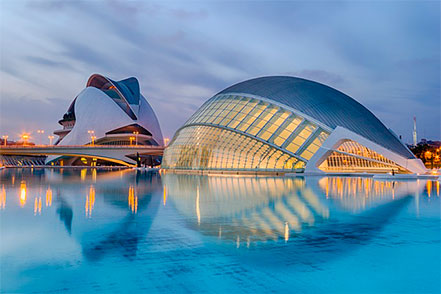 Valencia is the place where to paella comes from, one of the most spectacular festivities in Spain and (supposedly) the Holy Grail that Jesus drank at the last supper. We are sure that travelers will be pleasantly surprised by the cruises from Valencia and the warm and welcoming character of their inhabitants.      You can count on a wide selection of packages of excursions on the surroundings of Valencia and the best offer of everything, you can always find something to satisfy not only your tastes but also your party rhythms.      Valencia has a hot summer Mediterranean climate with semi-arid climatic influences. Their average annual temperature is 17 ° C - 22 ° C during the day and 13 ° C at night. In the coolest month, the average temperature of the sea is 13-14 ° C.      In the warmest month, the temperature normally during the day ranges between 28-34 ° C and above 23 ° C at night, the average sea temperature is 28 ° C.

Canarias.com is your travel agency in Tenerife. Book hotels,excursions and cars by internet or in any of our offices on the island.

What does Canarias.com have to offer?

Exclusive offers for our subscriptors Receive the best offers and promotions direct to your inbox!

With just a call to our agents they can help you with any questions you may have.Our opening hours are

Minimum price guaranteed We do not charge you for your booking

One of our commitments here at Tenerife.com is to guarantee you the lowest price possible in internet on accomadation, therfore if you find cheaper on another website we will " PAY YOU THE DIFFERENCE "

At Canarias.com we reimburse you the full amount you have paid for those bookings that when cancelled do not incur in any penalties that our suppliers (hotels, touroperators, airlines, etc.) may have determined and that are shown at the moment of booking.

Volver I´ve got it, thank you!